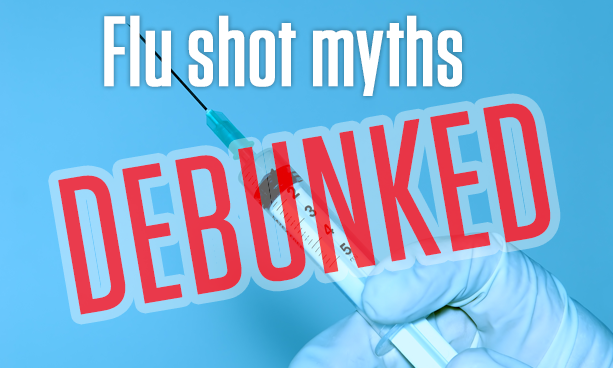 Last month we published an article with tips for avoiding the flu virus. As we tell all our customers, the best way to avoid catching the flu, is to get a flu shot every year, especially if you’re a senior!

But interestingly, every year there are those out there who question whether a flu shot is effective.

There are so many myths and misconceptions regarding the flu shot, we thought we’d clear some of them up in this article.

The first misconception is that when you get a flu shot, we’re injecting you with the active flu virus. Not true.

A flu vaccine contains an ‘inactive’ version of the flu virus and is therefore not infectious. So, put simply, you cannot get the flu from a flu shot!

So how can it be that some people will insist they came down with the flu after receiving a shot?

A number of possible reasons could explain why some people get the flu or flu symptoms after receiving a flu shot.

One reason could be that they’ve contracted another virus with similar symptoms. Rhinoviruses, which we associate with the common cold, can often produce flu-like symptoms.

It’s also possible that someone could contract the flu between the time they receive the shot and the time the body builds up its immunity against it, which could take up to two weeks.

Another common misunderstanding that may explain why some still experience the flu after a flu shot is that the flu shot is designed to tackle the several most serious flu viruses out there. But there are many more than just those strains. It may be that someone with a flu shot subsequently picks up a strain of the flu virus not covered by the flu vaccine they’ve received.

It’s also worth pointing out that while it’s always best to get a flu shot even if you’ve never had one before, getting a shot consistently each year will help your body build a stronger immunity to the flu virus and make your flu shots even more effective.

Hopefully that dispels some of the myths out there. Remember, a flu shot is your best shot if you want to avoid the flu! Call Paolo and the team at Medicine Shoppe in Westbank and schedule yourself for a flue shot today!